Hit enter to search or ESC to close
Publications

The Advertising Standards Council of India (“ASCI”) has on 22nd February 2021 issued draft guidelines pertaining to “Influencer Advertising on Digital Media” (“Guidelines”) for stakeholder consultation. The Guidelines set out the need for differentiating between general content and promotional content shared by Influencers. The content posted by the Influencers have far reaching consequence on the viewers due to huge number of users and followers associated with the Influencers. Thus, it is important that the user/ viewer is able to identify Advertisement content as such. The Advertisement should not be misleading to the consumers, hence it is important to create a clear distinction between content and Advertisement. The final Guidelines will be issued by the ASCI on or before 31st March 2021. The final Guidelines will be applicable to all promotional posts published through Digital Media on or after 15th April 2021.

Summary of the Guidelines:

ASCI will issue a notice to both brand owner and Influencer for violation of any Guideline in the case of a consumer complaint and take suo motu cognizance of a potentially objectionable Advertisement. In the case of disappearing posts, a screenshot with timestamp would suffice as prima-facie evidence of the Advertisement having been published.

The complaint process against an Advertisement is as follows: 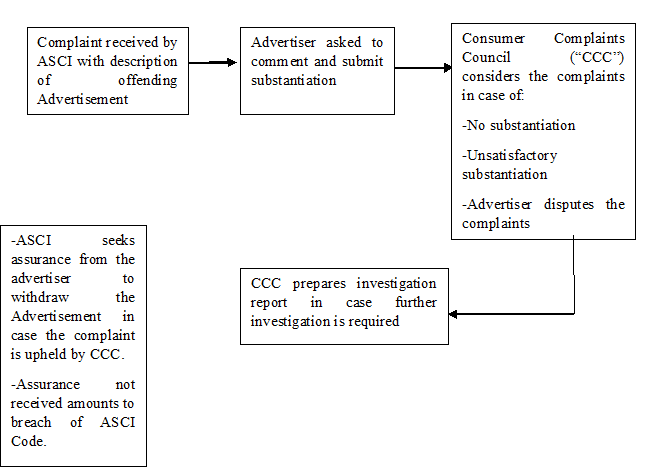 Considering the wide reach and the rise in the number of Influencers, it is important that a direction is available to the Influencers to advertise content and also take responsibility for their content and claims which they make through the Advertisements. These guidelines will go a long way in protecting the consumers from misleading/ fake Advertisements and also put the Influencers under an obligation to provide true and correct information to the consumers and take accountability for any fake claims made in the Advertisement posts.